You're not an expert if …

One of the things I find just plain silly is the large number of people on Internet forums who believe that they can present themselves as expert modelers by parroting certain stock criticisms or truisms that they feel denote expert status. As a public service, here are seven of these tired bromides … none of which mark you as an expert modeler.

Criticizing Model Railroader magazine does not make you an expert modeler.

No, it’s not perfect for everyone, but MR is the "big tent" that serves most of the hobby pretty well. Yeah, yeah, we get it, you're telling us you're much too advanced for MR magazine. We just don't believe you. Or care.

Unstinting loyalty to Athearn Blue Box does not make you an expert modeler.

Good grief. There are lots of terrific models on the market today. Some of Athearn's products are fine … some, with their warped car weights and meat-grinder drives, are better left as a hoary memory of the past.

Worshipping at the altar of Allen (or Ellison, or Westcott, et al) does not make you an expert modeler.

Being a groupie doesn't impart any special status to your modeling. Especially if it closes your mind to the myriad different approaches and concepts that can inform and improve your modeling and enjoyment of the hobby.

Complaining about prices does not make you an expert modeler.

No, it's not the world's cheapest hobby. But allowing for inflation, model railroading gear is a better buy relative to the past than are homes, gasoline, and automobiles. (Here's a tip: complaining about the price of cars doesn't make you Jeff Gordon, either).

Denigrating newbies and casual hobbyists does not make you an expert modeler.

Still haven’t started your layout because you haven't yet tracked down the names of the porters in all the Pullman cars operating over your stretch of mainline on April 9th, 1955? Your dedication to prototype authenticity is awe-inspiring. But it doesn't impress me to hear you rant about the guy who's actually building and enjoying something, albeit with some anachronisms. In fact, complaining about that guy's lack of modeling rigor just makes you sound like a bitter twit. Yo bro', it's a hobby!

Constantly predicting the death of the hobby does not make you an expert modeler.

These self-appointed Jeremiahs of the Johnson Bar harp incessantly about the impending death of the hobby, brought on by the proliferation of ready-to-run, the horrifying influx of unwashed masses who don't know their John Allen from their John Armstrong, and the fluoridation of public water supplies. Not that these folks ever do anything to bring newcomers into the hobby. Oh no, they've got much too much on their plate defending the hobby from the rabble who just want to build layouts and enjoy the process.

Kvetching about ready-to-run does not make you an expert modeler.

Face it, pilgrim, the hobby has changed. Models today are much more detailed than even 10 to 15 years ago. Way back when, RTR models were just kits that someone had assembled … now they are engineered for efficient production. Not everybody has time and skills to whip up an SP C10 2-8-0 MacGyver-like from two old tin cans and a roll of solder. But they can still build a great layout and that's a fine thing. And if you insist that scratchbuilding everything is the only true way to model railroad, have at it! Let us know how the armature-winding is going …

Of course, the people who need these tips the most won't see themselves in this list. They'll just stay in the group I like to call Doggedly Fretting about Unimportant Stuff (DFUS). In case you're wondering, that acronym is pronounced "Doofus".

Note: This post in no way is meant to criticize people who make the investment in time and effort to improve their skills, scratchbuild, and/or research the prototype. I find their efforts appealing and motivating. I have also found most of the true expert model railroaders I've met to be helpful, inclusive, and embracing of change. Unlike most of the DFUS crowd. 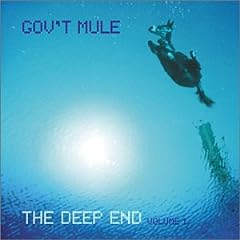 Warren Haynes has long been a favorite. Another member of the extended Allman Brothers family, his brawny vocals and smooth playing are a nice complement. Gigs with the Allman Brothers, The Grateful Dead(!), his own Gov't Mule, and solo make him one of the hardest working guitarists in rock. I enjoyed listening to Gov't Mule's The Deep End (Vol. 1) this weekend, which saw the surviving members of the original band teaming with a legendary roster of guest bass players, vocalists, and guitarists. The results are nicely diverse and it's interesting to hear some legendary players inspiring, and inspired by, Haynes and drummer Matt Abts.
Posted by Byron Henderson