I repeatedly make the mistake of wading into discussions of Timetable and Train Order on Internet forums. TT&TO is certainly the flavor of the month in model operations right now. Many are attracted to it because of the publicity from some well-known modelers who are TT&TO enthusiasts.

That's fine, except that folks are now going through all kinds of mental gymnastics to justify naming whatever compromised and bastardized version of the operating rules they adopt "TT&TO".

Some of these schemes are little more than sequence timetables that are set up to extend as trains run late. Others are Track Warrant Control in disguise … having none of the flavor of individual crew decision-making that so typify TT&TO.

But folks are obsessed with the Timetable and Train Order "badge of honor" -- so they call these weird hybrids "TT&TO" and are hyper-defensive toward any thoughtful consideration of what they are planning (or viable alternatives). No matter how much they corrupt the concept, they fight fiercely to keep the TT&TO moniker.

Bottom line, there are some circumstances of layout infrastructure, crew desires and capabilities, desired train densities, etc. that just don't work well with TT&TO in the model environment. But instead of facing that reality, these folks cling to the cachet of TT&TO -- even if in name only. Oftentimes, it seems to me they would be better off with another method of train control, even if slightly anachronistic for the modeled period, to more smoothly handle the high traffic volumes folks tend to run on model railroads. But no, it's TT&TO sine qua non.

I enjoy operating on TT&TO layouts (if the infrastructure and concept can support it) -- I've even helped set up TT&TO sessions on some layouts. So I've got nothing against TT&TO in principle. But it does bug me when people delude themselves and others with their ersatz schemes by labeling them "TT&TO". Choosing a train control method as a status-seeking exercise is a mistake, in my opinion.
Posted by Byron Henderson

Looking Back: the Ventura County Ry.

Things have been pretty hectic at LayoutVison Intergalactic HQ recently, so I haven't had time for a lot of blog posts. But I did finally put up another of my "might have been" layouts.

This one was based on the Ventura County Railway, which interchanges with the UP (formerly Southern Pacific) in Oxnard, CA. I lived nearby in Southern California at the time and it would have been a neat N scale switching layout in the oversized finished garage of the house I owned there (1989-1990 or so).

Bruce Morden wrote a great article on the Ventura County Railway in Layout Design Journal #26, Spring 2001, published by the Layout Design SIG. I reworked my design in 2001 for the article and looking at it again now confirms that it would have been an interesting layout to build and run, even if I would make a few changes if designing it today.
Posted by Byron Henderson

It is great to see another of my custom layout designs published in the commercial press. The latest article in Model Railroad Hobbyist October, 2009 (issue #4) describes an HOn3 layout based on S.P's famous narrow gauge Keeler Branch (former Carson and Colorado). The track plan had to be designed in stages, since the room could only be occupied a bit at a time. Model Railroad Hobbyist is always free to download here.

Click here for a better view of this this track plan. For the full description of the track plan and operations, and great photos of the real-life railroad, download Model Railroad Hobbyist magazine, October 2009 (issue #4).

The article is thoroughly illustrated through the generosity of railroad historian and author Joe Dale Morris. Mr. Morris has recently published an extensive history of the last decades of the real-life line, Southern Pacific's Slim Rails in the Sunset: 1940-1960 (Southern Pacific Historical and Technical Society, 2008). The book is again available from the SPH&TS site or at dealers.

Unfortunately, I completed the design quite a while before Mr. Morris' book was available, it would have helped with some nagging questions. He is truly an expert on the topic.

The Laws Railroad Museum and Historic Site in Laws, CA has preserved some of the equipment and buildings of the S.P. narrow gauge, and also generously made photography available.
The approval to publish photos of long-gone railroad scenes is sometimes very difficult to obtain. But when the copyright holders are as generous as they were in this case, it wonderfully enhances the final product.
Posted by Byron Henderson

With Scenery, no Less

I've heard from a few folks over the years that they are building one of my published plans from an article or the website. My own small N scale switching layout has been done a couple of times in different scales.

Ben Earp sent along a photo of his recently completed version. Different era and locale, but it was fun to see what his version looks like. Modeling and photo by Ben Earp. 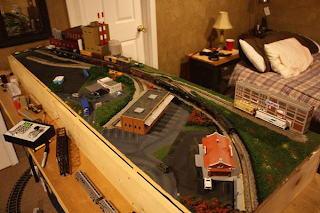 If any blog readers have ever built one of my published track plans or used a segment of one of my designs as a portion of your layout, I'd enjoy seeing a photo and reading how it turned out.
Posted by Byron Henderson