The unintended ironic point is the prototype file photo that MR's editors used to illustrate the article: an Alco S‑2, noting in the caption that the S-2 "is typical of the 1950s motive power … to use" on the N scale layout. Oh, indeed, an S-2 would be perfect for the layout, as well as for many others.

But of course, there's been no mass-market N scale S-2 available for a couple of decades. And that model, from Arnold, was pretty poor (to put it as kindly as possible). 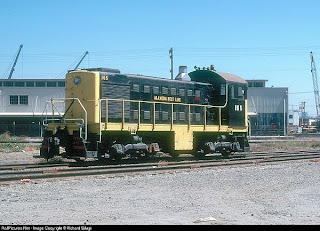 An elusive (in N scale, at least) S-2, this one in the later livery of one of my favorite shortlines, the Alameda Belt Line. Photo by Richard Silagi.

Just to rub salt in the wound, Athearn's latest big announcement is an HO GP-38-2 in the Genesis line. Really? A nice model, I'm sure. A lot like all the other HO GP-38-2 models (Atlas, Bachmann, Walthers/Life-Like). Including the existing lower-end RTR HO-GP-38-2 model -- from Athearn itself!

As I've mentioned before, a quality mass-market N scale Alco S-1/3 and/or S-2/4 switcher model would likely sell tens of thousands of copies. Yet model railroad manufacturers continue to crank out "me too" HO models. I guess it works on someone's marketing spreadsheet. I can't see how it makes sense in the real world, though.

I suppose that we can't hold it against MR's full-time editors. Apart from David Popp, the rest are primarily HO scalers. And I'm sure none of them could possibly imagine that such a popular engine in real life could be completely missing from the second most popular modeling scale.