When I was a young and enthusiastic first-time manager, one of my employees was an older gentleman originally from the Southern part of the US. After I described a complex new procedure we were going to put in place, he left the room muttering under his breath, "Fixin' what ain't broke …". As it turned out, he was absolutely right – the "old" way worked fine and my shiny new idea added nothing but complexity.

I often think of this when I read about people suggesting complex changes to the 4-cycle car-card-and-waybill (CC&WB) system. As regular readers of this blog and my articles in the Operation SIG's Dispatcher's Office (July 2007) know, I'm a big fan of the tried and true CC&WB. They are self-correcting, easy to get started and maintain, and they are used on so many layouts that most visiting operators know how to use them.

And yet, folks feel compelled to add more and more complications: three (or even four!) car card boxes for each industry, extra tags for cars that are still being loaded or unloaded, extra tags for cars that are off-spot, convoluted routing detail, etc., etc. Hey, if this seems like fun, knock yourself out! But the basic destination-based information on each cycle of the waybill can actually provide all of the car-routing sophistication needed with just one box per industry and reasonably complete information on the train instructions.

Not to say that there aren't some simple tweaks to the traditional system that can add interest. Bad Order, Icing, and Clean Out tags, for example, are simple to add but can enhance operating realism. And we should always be open to new ideas that provide a benefit in terms of easing reset overhead or improving the operator experience.

I find that many of the CC&WB permutations are suggested on Internet forums by theorists. They've rarely operated with CC&WB and have certainly never set up a session using the system, but they've got a lot of ideas for radical changes that are "needed". Maybe so. But "fixin' what ain't broke" might not be necessary when the basic system works so well.
Posted by Byron Henderson

The Internet is an amazing thing. It's now possible to have one's attitude (and ancestry) questioned on forums all around the world! Before the Internet, it required people to actually have met me to form those kinds of opinions. Now that's progress!

I find it a lot of fun, actually …
Posted by Byron Henderson

It's tremendously difficult for me not to try to help when someone posts to an Internet forum yet another mindless oval with an unworkable yard or a spaghetti-filled blob that should be called the Ragu Northern. But I've had to stop.

As the old joke goes, "Never try to teach a dog to sing. The results are poor, and it seems to annoy the dog." My endless exhortations for folks to step away from the CAD, learn some layout design principles, and develop a concept and vision for their layout before designing a track plan generally fall on deaf ears. (OK, there was one success recently, but it's the exception that proves the rule).

Instead, people just keep cranking out the CAD revisions – each new plan as infested with flaws as the last. Although the flaws often do mutate from revision to revision.

And what's worse, these neophyte designers often become understandably defensive about their precious track plan, no matter how hackneyed, impractical, or inaccessible. And then the forum chorus starts chanting, "Just build it, it'll be fine – it's your plan, do what you like" … talk about the blind leading the partially-sighted!

Anyway, finally, it's enough. As my wife often reminds me about other matters, "Byron, it's only 'help' if the other person wants it." So true.

Oh, I'll probably make an occasional exception for comments about published plans – not so much pride-of-poster-ownership there. Or I might suggest some better-thought-out plans for the same space from which the help-seeker might hope to learn. That way, I can perhaps accommodate my desire to be helpful without aggravating the help-seekers (and myself) so much in the process. We'll see ...

Update 18 July: Based on notes from a couple of you, I guess the forgoing could have been clearer -- especially the title. I'm still posting occasionally on Internet forums and offering general layout design and operations suggestions. What I've decided to stop providing is comments on the specific details of a poster-provided plan. And I'm still offering custom layout design services to those who are interested, of course.

Thanks for reading!
Posted by Byron Henderson

Alcos in the Alcove

There can be a lot of funny little nooks and crannies in houses. One of my layout design clients had a 5-foot-wide alcove where had set up a 24" deep plywood shelf. The original thought was to build an HO diorama in the space. But when the OK came for another adjoining shelf, the idea of an L-shaped switching layout took form. 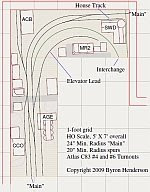 The resulting design had to incorporate some specific kits and suggest a granger motif, so some challenging compromises and trade-offs were necessary. The resulting design is featured in the most recent edition of Model Railroad Hobbyist magazine (Q3 2009), always available for free download at the MRH homepage. You can also see the HO shelf switching layout track plan in my Layout Design Gallery.
Posted by Byron Henderson