A wrote a while back about my inexpert first model railroad layout design, criticizing myself for the model railroad cliché of "an industry in every corner". In response, my friend Robert Bowdidge asked me later if I thought a good design must always look visually interesting and unique as a track plan. Robert, who is building a fine Southern Pacific based HO layout, noted that he had tried some exotic-looking benchwork shapes in his design before concluding that a more common U-shaped approach ultimately yielded a better configuration for the layout in the alotted space. And having operated on Robert's layout, I can vouch for the fact that the longer, straighter legs of the "U" make for better representations of the switching areas and an appealing operating experience.

Certainly I have seen this is also true for many of my own custom model railroad design projects. Sometimes my clients seem a little disappointed that the benchwork outline is so plebeian. But real-life railroads sought to have the longest, straightest tangents possible, using only the curves necessary to join those tangents. The model railroad benchwork shape that yields more of those straight areas will often be a good choice. There are exceptions, of course, especially for mountain-crossing routes. But even in those real-life situations, the most interesting operating areas (towns, yards, etc.) were often located on relatively straight stretches.

The same goes for schematics. A lot of the newcomer layout design efforts we see posted on the Internet serve up a multitude of routes and cross-connections more akin to a pasta bowl than to creating a plausible model railroad. But unfortunately for the real-life railroads, there are no secret hidden paths between Chicago and Los Angeles that cut off the intervening mountain states. So the more realistic schematic tends to be sequential and not variable.

A layout designed with a relatively straightforward benchwork footprint and a linear schematic can still be intensely engaging and visually interesting when built, even if the 2-D track plan is somewhat plain. Thoughtful track arrangements and operating patterns along with the skillful use of viewblocks and scene separators can make the actual layout a very satisfying experience to visit and/or operate. It's the subtleties of layout design that set apart engaging layouts from random collections of track. I wrote about some of these in my series on the Tricky Traps of Layout Design and Track Plan Analysis.

So for me, wild benchwork footprints, tricky multi-path routes, and a visually intriguing track plan diagram are usually secondary to more understated, but critical, design concepts that create long-term interest and enjoyment.
Posted by Byron Henderson

I had the chance to spend some time with Will Ayerst, one of the proprietors of the Model Railcast Show last week, talking about port-themed model railroad design and operation. Our audio session was recorded and is available for free download on the site as Show #38. My discussion with Will begins about 30 or 40 minutes into the show.

Model RailCast is an interesting alternative in model-railroad themed media. I never tire of hearing myself talk, so it was fun for me. Whether it's interesting for anyone else (and thus, whether I'll be invited back), remains to be seen.
Posted by Byron Henderson

As I've discussed the layouts in this series, I've described how a number of them started me thinking more about terminal switching areas and rail-marine environments. But one in particular was the key that unlocked my inner rail-marine modeler -- Russell Schoof's Free Haven Terminal from Model Railroader, October 1990 (also in 48 Top Notch Track Plans, Kalmbach, 1993). 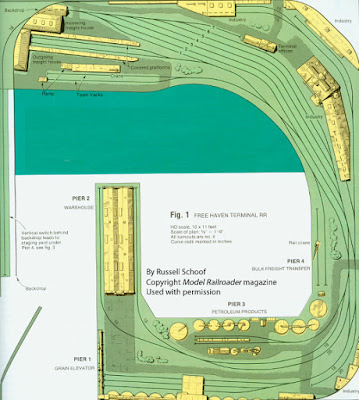 Click here for a larger image in a new window

Schoof's layout packs a lot into 10X11 feet in HO, albeit with the use of some pretty tight curves. A decent-sized yard offers some room to work, and a variety of industries and terminals provide reasonable destinations for a good mix of freight cars. Some industries are larger, with realistic multiple tracks. Separate inbound- and outbound freight houses are a rarity on other model railroad track plans, but were common in real life during the less-than-carload (LCL) era. The published plan also has some secluded staging below, reached by a John Armstrong-style "vertical turnout" at the left of the diagram.

There are a few shortcomings that I would try to correct if adapting Schoof's Free Haven Terminal plan for my own use. I might opt for staging behind the backdrop on the same level ("surround staging") with a lift-gate across the room entrance to allow a continuous-path option. With that change in staging, the way the track goes off-scene through the walls of one of the freight houses could be reworked to be a little less contrived. Some of the industries are a bit generic, so choosing signature industries that would add more port-side personality would help. A dedicated yard lead would be a help with multiple crews working. And certainly there would be room to work in a car float, one of my favorite rail-marine features, to add an element of interchange. There are a few other quibbles, but the overall concept is very sound.

I'm apparently not the only one who has been inspired by this design. A group of four French modelers has built a very fine N scale sectional layout called the Free Heaven Harbor Terminal that shares many features of Schoof's Free Haven Terminal design, even the passage through the freight house to staging. Here's their track plan and a scene from their former website. (Their former address has been taken over by a malware site, so don't look for it.) The layout was also featured in a french-language magazine. 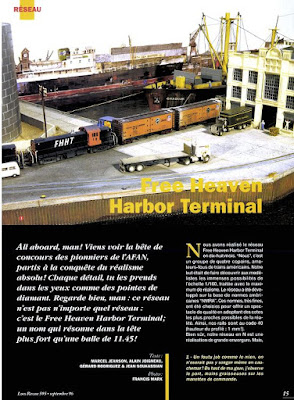 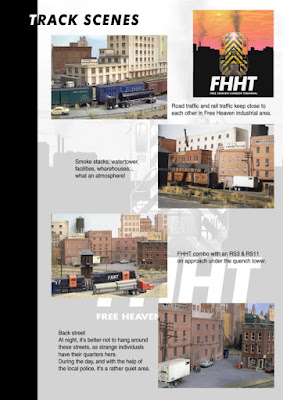 Another element that makes Model Railroader's article on Schoof's Free Haven Terminal article so inspiring to me is the inclusion of suggestions for operation and some of the neat "artist's conception" perspective line illustrations that were often featured in MR articles of the era. These provide a hint of what the final layout might be like and add to the rail-marine atmosphere (even though some of the views are admittedly from angles that might not actually be possible on the layout).

Like many of my inspirational layouts, the Free Haven Terminal seems of an eminently "do-able" scope. I've been impressed and educated by dozens of other layouts in person and in the press, many of them large, decades-long efforts. But this handful of mostly more modest inspirational layouts still excites and motivates me personally to get off my duff and build something. I hope they've done a bit of the same for you.