In talking to clients and trying to help folks on forums, a couple of pithy comments have been springing to mind recently:

It's no fun if the trains don't run.

If not drawn to scale, it’s liable to fail.

The first speaks to the importance of reliability in considering design options, the second to the tendency some have for flights of fancy about what can actually fit in a given space.

Hokey? Yeah, I guess. But how many misguided newbie layout design train wrecks (literally and figuratively) might have been avoided with the liberal application of these two ideas?
Posted by Byron Henderson

A thread on one of the Internet forums reminded me of an interaction I had with a fellow a couple of years ago. His room was just under 10'X10', HO scale, double-track mains, transition era. Not a huge space, but workable.

Then he told me about his standards: only #8 turnouts would be permissible, along with a 36" minimum radius. His reasoning? It would be more like a "real railroad" and he wanted his layout to be recognized as uniquely realistic.

Okey-dokee. But one doesn't have to be a very experienced designer to see that there is darned little straight track left after placing 36" circles around a 10X10 foot space.

I suggested modulating his standards -- perhaps one scene with broad radii and turnouts and then using more compact standards elsewhere. Nope, that just wouldn't do for him. We both recognized that I wasn't the right person for the job and he continued his quest for a designer who could alter the space-time continuum.

Layout design standards should not be status symbols. Broad curves and #8 or larger turnouts look great – but in the more modest spaces typical of most model railroads, they create the need to significantly reduce the number and size of other layout elements possible.

If reducing operating potential or the number of railfan scenes in exchange for broader curves and turnouts is an acceptable trade-off, more power to you. But as John Armstrong noted, too large a minimum radius can be just as deleterious to a design as a minimum radius that is too small.

Standards should follow the concept, purpose, and space available for a layout, not lead them. That's why I hate to see folks with more modest spaces declaring #8 or #10 turnouts as their sine qua non even before developing their overall vision for the layout.
Posted by Byron Henderson

I work on more layout designs and track plans than most people -- dozens and dozens, in fact, in the last six years. These plans are for many different spaces, concepts, and scales. And yet, I'm still sometimes surprised when I start a new project at how little of what my clients and I have conceptualized will actually fit -- when drawn to scale.

Curves, turnouts, straight sections to ease S-curves, horizontal and vertical easements, and on and on. Each of these takes more space than I would like. And certainly more than most people think.

That's why I just shake my head when I see what some people post in forums. They prattle on for months (or years!) about the fabulous layout design on which they are working: Steel mills, division point yards, car floats, auto plants. And all in 10'X10' in HO.

OK, that's a slight exaggeration, but only slight. Bottom line, if you haven't rendered the major elements to scale in some fashion, you're kidding yourself. That can be CAD, paper templates, or a to-scale sketching technique like John Armstrong's squares. Any of these can provide a quick (and usually sobering) reality check.

But these empire builders carry on, regaling their rapt forum audiences with tales of how great it's going to be. And they often illustrate their posts with photos of clutter-filled corners, stacks of unbuilt Blue Box kits, and horizontal "benchwork" surfaces piled high with soda cans, stacks of magazines, and other detritus.

Now there is a time, early in the design process, when it's a very good idea not to be constrained by scale. However, that's an early conceptual phase and reality must eventually be reckoned with. 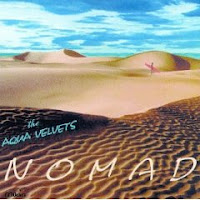 The Aqua Velvets' CD Nomad has been in heavy rotation lately at LayoutVision headquarters. A different take on modern instrumental surf music, with many of the tunes having a slightly darker tone (surf noir, if you will). Just for variety and whimsy, some other styles are mixed in, including what sounds like a rumba and a bit of reggae flavor. The playing is crisp and toneful, without the speed-for-speed's-sake that burdens some instro surf music.

And there are plenty of conventional surf sounds, too, played with a respect for the tradition but an eagerness to stretch a bit musically. The kind of surf music that might make you remember fondly those sunny days at Hermosa Beach -- even if you've never been out of Nebraska.
Posted by Byron Henderson