It was the Pantry

Yes, the pantry finally did it. When the previous owners remodeled the kitchen in our 40+ year old house some fifteen or so years ago, they chose the least expensive cabinets available. Pressed wood and staples -- and not enough of either. From the time we moved in, the cabinets have been slowly returning to their primordial state, that is to say, literally disintegrating.

Five-minute epoxy and aluminum mending plates have served to fix some of the major cabinet crevasses over the years we’ve been in the house, but a few months ago there was a huge crash from the kitchen. One wall of the pantry had decided to part company from its loosely-coupled companions and the large shelves crashed to the bottom like falling floors in a Warner Brothers cartoon. Off to the hardware store for threaded rod and metal plates (and more epoxy), and the pantry was soon back to some semblance of function. [Oh yeah, and company was coming that evening for dinner. No kidding.]

But that was the last straw for the lovely wife, who started using profanity like “kitchen remodel” and “push out that wall”. And so we’ve started down the long twisted path of major home improvement.

“What’s this got to do with model railroading?” one might reasonably ask. Some may remember the famous poem “For the Want of a Nail”, republished in Benjamin Franklin’s Poor Richard’s Almanack. The basic premise of the rhyme is that the loss of a nail leads to the loss of a horseshoe, then the horse and rider, then a battle and ultimately the loss of a kingdom – “all for the want of a nail”. The pantry collapse is sort of like that – the first step in a long sequence of events. With the pending remodel, the garage where my layout is situated could become quite crowded. If the remodel is just the kitchen, crude temporary cooking facilities and boxes of dishes, pots, and pans will fill the space. If the remodel is even more extensive, some furniture will be stored there. In any case, not much layout building will get done for a while, at least not in the garage.

I’ve known in the back of my mind that this was a likely scenario, but I was able to keep it way back there. But the impetus for layout construction has certainly diminished since the pantry’s unfortunate breakdown with the knowledge of what was likely. So what to do?

While pondering this question, I thought about advice I’ve given to my own model railroad layout design clients when faced with some unexpected space upheaval. “There’s always some way to build something,” I cheerily encourage them. I hate it when my words come back to mock me. But maybe there is a way. After all, friend Bart Thurber found a way to use a storage room at his business for a no-muss/no-fuss representation of ATSF’s Alice Street Yard on shelves above the storage.

Our guest room doubles as an office and has a couple of long walls. Hmmm. Perhaps a narrower desk, since I’ve moved from a CRT to a flat-screen monitor. Maybe a few sections of layout built on shelves along the walls with a bridge across the window. That could work. But what to put on those shelves? HOn3 Hawaiian railroad … no, back, away, foul spirit!! OK, so let’s stay with the Oakland Harbor Belt theme, era, and N scale so I can use the on-hand locos and rolling stock. Maybe sections of the layout that might even be useable in the garage later. (Or in a dedicated train room if the remodel turns extensive – or is that expensive?).

OK then, what to build? Fernside Yard and Alaska Basin could probably fit, but not in configurations that readily transfer to the ultimate garage plan. So how about Brooklyn Basin? (Click here for a better view of the Brooklyn Basin map.) 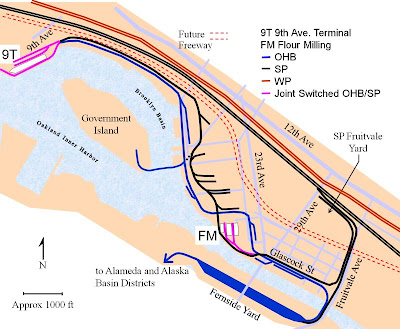 This proto-freelanced area sports some interesting possibilities, with a huge flour milling complex, canning company warehouses, a massive glass plant and a marine terminal. In real life, the SP (and now UP) served the area, but I’ve always imagined modeling coopetition here with the OHB and SP jockeying for customers. 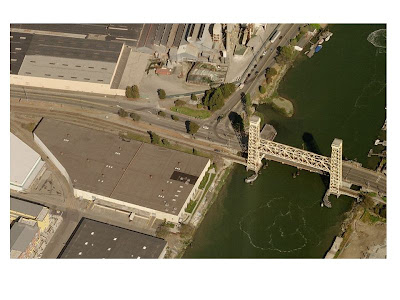 Let’s see… the Fruitvale Ave. lift bridge (above, from Microsoft Live Earth), glass plant (upper left in the photo), and canning warehouses (lower left) along one short wall, narrow bridge for Glascock Street across the window, then the major milling complex and marine terminal along the long wall. As Gene Wilder’s Froederick Frankenstein screams in the movie Young Frankenstein, “IT … COULD … WORK!!!”