One of the major gaps in model locomotive rosters has been a quality mass-produced N Scale Alco S‑1/3 or S‑2/4, a fact with which I have bored readers before – and before that. S‑2s, in particular, were on hundreds of different railroads' rosters from 1940 to the present day.

So it was extremely welcome news from the National Train Show yesterday when Atlas announced its upcoming model of the Alco S‑2. In an embarrassment of riches, Bachmann also announced an S‑4 model in N scale at the same show. I would have made do with either, frankly, but the S‑2 is terrific. (Yes, some may grouse that one of the manufacturers could have kicked us down an S‑1/3 instead of similar-appearing S‑2 and S‑4 models – but let's not be bitter.) 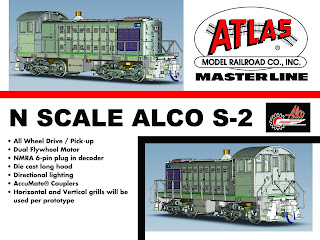 Depending on road names and liveries, I'll have some S‑2s on order as soon as possible. And maybe an S‑4 or two for good measure – they fit my 1955 modeling era as well.

But it does raise a question for me. I had considered modeling the prototype Alameda Belt Line (ABL), which was exclusively S‑2 powered in my era. But partially due to the lack of a mass-produced model of the Alco switcher, I developed a proto-freelance theme instead. Atlas is doing different versions of the S‑2, so one of them will probably be pretty close to the ABL's units (after some custom painting, of course)

So now … stay proto-freelance? … or ABL?
Posted by Byron Henderson