When the student is ready, the track plan appears. Or reappears, in this case. When I first saw Andy Sperandeo's 9X12 HO ATSF San Jacinto District plan in the February 1980 Model Railroader, it didn't make much of an impression. (Especially compared to the Carrabasset & Dead River in the same issue).

But by the time I encountered the plan again in the early 1990s, in Kalmbach's Track Planning Ideas from Model Railroader (1981), I had learned enough about model railroad layout planning to see and appreciate the track plan's innovative points. 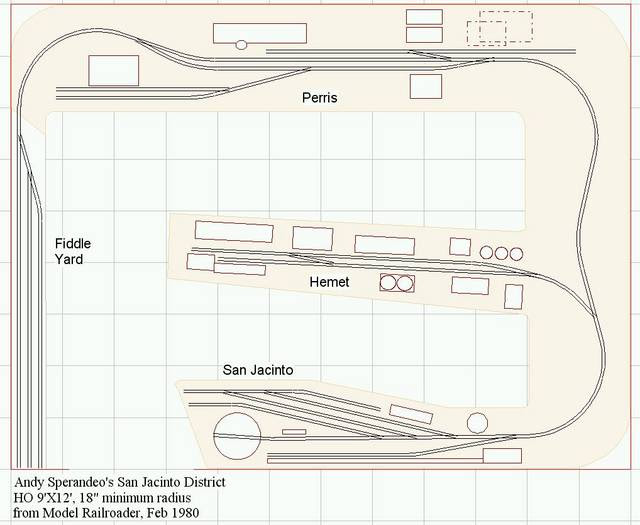 The modest amount of trackwork that had seemed sort of boring before now looked much more realistic. Linking the plan to real places and the actual types of industries found in those locations created more interest. A layout based on out-and-back branch line switching, rather than endless round-and-round, seemed attractive. And the accessible staging, which had seemed like a waste of perfectly good layout space to me earlier, now enabled the engaging flow of traffic to- and from the "rest of the world". (This might have been the first time I was exposed to the concept of a fiddle yard, where consists might be reset between sessions.)

The San Jacinto District was not the first layout I had seen with most of these elements, but I was beginning to see how creating a track plan was an exercise in balance. Sperandeo's track plan was one of the few "theoretical" designs in that era to realistically address the need for adequate aisles, for sufficient staging to create the desired operations intensity, and a variety of operating schemes to address seasonality (and add operating interest). Sperandeo's track plan also exuded a personality – the atmosphere of southern California branch line railroading. This was a refreshing change from many of cookie-cutter layouts I had been seeing that seemed to all be set in the same generic eastern burg.

I was getting an inkling that there was more to model railroading than packing in loops of track. (Would that the masses posting their sorry CAD creations on the Internet might learn the same lesson.) Operating trackage, staging, room for scenery, operational theme, aisles for crew members, etc, all had to be considered in coming up with the track plan. Andy Sperandeo's relatively modest San Jacinto District plan inspired me to build my own knowledge of the myriad subtleties of layout design – a foundation I call upon nearly every day.

One of the more intriguing streaming audio channels I've come across is Frank's Americana on Live 365. Self-billed as "Cooking the music of the world in the melting pot of American life!", the channel mixes a wide variety of styles and eras. While bluegrass and newgrass are strongly represented, one might also hear Swing, Big Band, Jazz, and Rock. Ralph Stanley to Flying Burrito Brothers to James Gang to Louis Prima would not be an unusual set. There are occasional clinkers (some '60s Top-40 hits I just don't need to hear again -- ever), but there are far more nuggets than dross.
Posted by Byron Henderson