1996 was a pretty stressful year: new baby; pressure-packed job at an Internet giant; and an impending household move. It was clearly going to be a while before any layout was started, but I was still planning on building the proto-freelanced N scale Midland Pacific* once things settled down. And then another seed was planted that would eventually shift me away from the branchline/secondary mainline concept to a more urban terminal-switching theme. 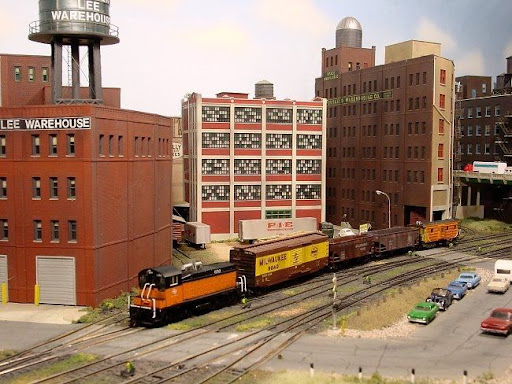 Bill Denton's Milwaukee Road Kingsbury Branch in the January 1997 Model Railroader was another revelation. In a very compact space – and in N scale – Denton had created an appealing replica of a real-life area that worked as an operating layout. The urban scenery was realistic without requiring scale acres of benchwork. And the concentrated activity typical of a real urban terminal provided plenty of engaging operating potential without unduly straining plausibility.

Track plans from Bill Denton's former site
The Kingsbury Branch is built in two portable sections, each measuring 21 inches deep by 6 feet long. An unscenicked 4‑track staging yard connects at the left of the upper section shown here (which also provides "room to work" for the industry tracks at the far left of that section). Denton's original inspiration came from an article by Randy Willis in the April 1975 issue of Model Railroader on the real-life area. From photos in that article and visits to the area, Denton developed a track plan that emulates the real thing in many respects, handlaying code 55 turnouts and code 40 industrial tracks to maximize appearance. He also decided to kitbash and scratchbuild, rather than using off-the-shelf structure kits, to try to replicate the buildings more accurately.

Looking at the layout photos, I realized that the urban buildings were strikingly effective as backdrops, towering over the railroad passing below. The busy trackwork intersected the street grid at interesting angles and suggested a real business with real work to do. And the many sidings, sufficient runarounds, "off-spot" tracks, and numbered door "sure spots" added realistic operating interest without resorting to tedious switching puzzles. Denton described the operation of the layout in a follow up article in the May 1998 MR. He has taken the layout to various train shows and events, a real benefit of the sectional approach. (The original intention was that these sections were to eventually become part of a larger home layout, but I don't know if that ever occurred.)

Of course, it didn't hurt that Denton is an excellent modeler and photographer. The images in the MR articles showed me that N scale urban railroading could appear very realistic in a very small space. While I didn't give up the Midland Pacific idea immediately, a new concept of urban railroading began to form. Bill Denton's Kingsbury Branch completely changed my perception of N scale and opened my eyes to the possibilities of urban railroading in a very inspirational way.

*My layout design and operating plans for the Midland Pacific were covered in detail in the Layout Design SIG's Layout Design Journal # 35, December 2006.
Posted by Byron Henderson