It was interesting to read about the changes George Sellios (of Fine Scale Miniatures fame) is making to his Franklin and South Manchester layout. OK, I'll start with the disclaimer: Sellios is an exquisitely talented modeler and I'll never come close to his skills, not that I feel the need to do so (thankfully, or I'd never have the guts to build anything).

I have read most of the Sellios articles in the commercial press; I even bought his book on the Franklin and South Manchester. But to be honest, I never really enjoyed the pictures; and I sold the book shortly after buying it. I never could identify what it was that bothered me, sort of a hyper-reality that I have found vaguely disquieting.

After reading Mr. Sellios' article in the December, 2006 Model Railroader magazine, I've finally put my finger on what's bugged me. It's certainly not the execution of Sellios' modeling, it's his vision. And not the semi-run-down-cusp-of-the-depression vision that some have criticized. Instead, it's the way the scenes are compressed, almost as if looking through a telephoto lens.

When we look at a real scene, our minds highlight the interesting bits (tracks, a train, a station building), but don’t focus on the relatively non-descript space in between. We sense that the space is there, but it's not remarkable. However, it's that very unconscious sense of the empty space that clues our minds to the realities of the scene.

Artists talk about the idea of negative space. The concept that what is not shown helps to create context and interest in what is shown. The empty space around an object helps create the interest in the painted or sculpted object itself.

Many of the scenes on the Franklin and South Manchester contain all of the elements that one might see in viewing a real scene, but they are compressed, even amplified. They're too close together (at least for me) -- there's not enough "negative space". The clutter of a 500-foot-deep scene in real life is compressed into 80 scale feet of model railroad.

Sellios notes himself in the article that he has un-detailed some areas to make them look more realistic -- removing crowds from station areas and wall-to-wall clutter from loading docks. The new scenes are still a trifle too condensed for my taste, but they are certainly more realistic to my eye.

I guess it all goes to show how individual are our tastes and how unique is each of our visions. That's something I really enjoy about our hobby and look forward to exploring as my own (much more modest) layout building continues. 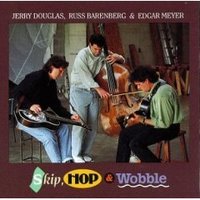 Currently Listening to: Skip, Hop, and Wobble by Jerry Douglas, Russ Barenberg, and Edgar Meyer. Acoustic "newgrass" music (and much more) with a kick. I've become such a fan of Dobro through listening to Jerry Douglas.
Posted by Byron Henderson