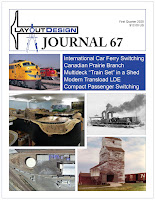 The most recent Layout Design Journal published by the Layout Design SIG brings together a nice variety of articles (including a couple of my own).

To download a free “Sampler” of a few pages of LDJ-67 and other recent issues, visit this link:
http://www.ldsig.org/ldj-index

My article contributions were the HO passenger switching layout and the modern transload facility, which is based on a real-life California site.

Even if you are not a SIG member, we welcome contributions  on layout design topics, including from first-time authors.

I enjoyed working on the latest Layout Design Journal, being delivered to Layout Design SIG members by surface mail and email now. 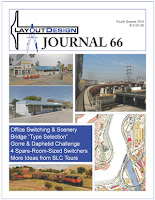 To download a free “Sampler” of a few pages of LDJ-66 and other recent issues, visit this link:
http://www.ldsig.org/ldj-index

We are now working on LDJ-67 and expect to distribute it in February; so renew soon if your membership is expiring. To begin or renew your LDSIG membership, visit this link:
http://ldsig.net/membership

One of my favorite events of the year is coming up this January 24-26. NMRA Pacific Coast Region and LDSIG will be hosting design and operations clinics and panels on Saturday, self-guided layout tours Friday and Saturday nights, and op sessions on Sunday. A volunteer team offers free design and ops consultations Saturday. Saturday sessions at the California State Railroad Museum (CSRM). For more information and to pre-register (recommended):
www.pcrnmra.org/sigs/

You need not be a member of either organization to attend.

Attention layout planners! For the next Layout Design Journal Challenge we’re asking designers to create track plans and stories for publication in the magazine. The theme this year is layouts whose purpose is one or more of the following: model railfanning, public display, scenery presentation, and/or fantasy-inspired ("RDSF").

Challengers may use *any* dimensions – from a few square feet to a large basement (or any one of the past challenge spaces).

Entrants need not be members of the LDSIG. Our target date to receive the first entries is January 31, 2020, but later entries will be accepted!

Read much more in LDJ-65 or on my website.
Posted by Byron Henderson 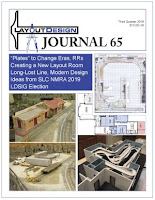 This issue includes: Changeable plates allow a layout to go back in modeled era and/or change prototypes for photography. Tips, tricks, and surprises in specifying a layout room in a custom-built home. Design Challenge: model railfanning, public display, scenery presentation, and/or fantasy in any space. Modern-era Switching Challenge layout based on a long-ago Fallen Flag. As seen on tour: Benchwork and Human Factors ideas from NMRA SLC LDSIG tour. Free on-line US topographic map source and use. LDSIG News and announcements, including Board of Directors Election.

You may download a free “Sampler” of a few pages of LDJ-65 and other recent issues.

To begin or renew LDSIG membership, visit this link.

The new Design Challenge is open to anyone, not only LDSIG members. I'll post it here in the next week or so.
Posted by Byron Henderson

For those keeping score at home, we can now add “International Trade and Tariffs” to the list of things that people on Model Train Forums think that they know a lot about – but don’t.

Another depressing example of the Dunning/Kruger Effect brought to us by the Internet.
Posted by Byron Henderson

See You in Salt Lake City

I’m excited to be participating in the Salt Lake City NMRA convention beginning July 7. Seth Neumann and I will be presenting the Layout Design SIG’s four-hour Layout Design Bootcamp "super clinic" Monday morning July 8 beginning at 8am. I’ll also be presenting my one-hour Small Layout Design – Beyond the Timesaver clinic Tuesday evening July 9 at 6:30pm. (Clinic handouts are on my website here, I may have slightly updated versions posted after the convention.)

In addition, I’ll be offering help sessions as part of the LDSIG’s free help program in the SIG Room. Sign-ups are on-site beginning on Sunday. All of the LDSIG activities, including the Wednesday General Meeting and self-guided Layout Tour, are found here.

As I have said here before, I hate that the NMRA continues to schedule Conventions at the peak summer heat times. It’s a dumb practice both in terms of that being the seasonal nadir of model railroading interest for many as well as offering unpleasant weather pretty much anywhere in the US. I’m not sure how many more years I’ll put myself through it … but SLC in 2019 is a go!

I was the editor of the LDJ for a handful of issues beginning late in the last century and returned as editor in 2011. Along the way, the magazine became full-color (a huge improvement!) and on-line-delivery options have become available. I try to encourage authors to contribute the same sort of thought-provoking articles that intrigued me when I was a reader.

While looking up some reference information for the recently published LDJ-64, I started counting the LDJs for which I have been editor. I was a bit surprised to find that it totaled thirty LDJ issues! (I also edited a few additional issues of the LDN before taking over the Journal).

Many thanks to the LDSIG leaders, Editors Emeritus, readers, our dedicated LDJ volunteers, and (especially) authors who have supported my work. 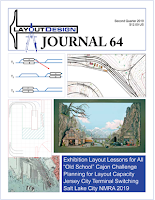 To download a free “Sampler” of a few pages of LDJ-64 and other recent issues, visit this link. And join or renew LDSIG membership at this link.

I mentioned my Model Railroad Planning 2019 article on designing switching layouts inspired by Clackamas, Oregon in both HO- and N scale for two different clients a few weeks ago. In that post, I noted that a friend was independently planning a 2-rail O scale layout for the same area.

I had a little time, so I proceeded to sketch up something to fit his roughly 16’X20’ space. He’s building with sectional track and benchwork sections (mostly 2’X4’), so that added a little complexity to the task. (Not to mention the demands of the large scale in terms of siding and spur length.) But he and I were happy with the results. 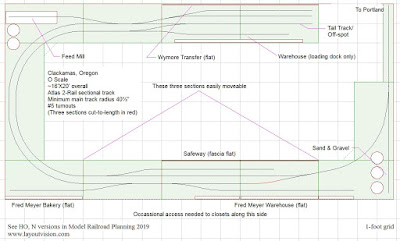 He needs occasional access to closets along the bottom edge of the drawing by rolling away the benchwork sections, so I tried to incorporate smaller track sections at those joints that could be easily removed and replaced. I gained some flexibility by wrapping the runaround along three walls. And the long, narrow strip of benchwork on the right wall was great for extending the main lead and imagined connection to Portland.

As with any design for a larger scale in a relatively small space, arranging things so that the larger industries may be represented by flats keeps down the square footage demands.

He indicates that he might swap the designations of the two Fred Meyer tracks to allow the bakery to be the longer track where a variety of car types might be spotted (hoppers of flour, tank cars of oils or sweeteners, box cars for packaging, etc.). He may make additional revisions as he builds, but this gave him a good starting point for his design.

I can’t remember ever designing three layouts in three different scales for the same real-life location. But it’s been fun!

Art in Model Railroading, Double-or-Half, and more in LDJ-63 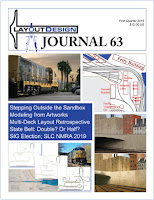 It was interesting to explore a number of topics from a different perspective in LDJ-63. Although I personally don't have the modeling or photography skills to approach art with my own work, I'm happy that others do—and are willing to share!

I personally particularly enjoyed Bill Kaufman's article on what he would do differently with his mid-sized San Francisco State Belt layout if he were to build it in half—or double—the space with the same scale, era, concept, locale, etc. I hope we'll be able to publish more of these articles by other successful layout builders.

To download a free “Sampler” of a few pages of LDJ-63 and other recent issues, visit this link.

Paper copies are in the mail now, on-line-delivery emails will start going out in the next week or so.