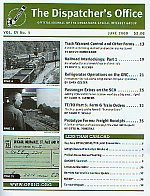 I'm pleased to have an article on Track Warrants and other operating forms in the most recent (June 2009) issue of The Dispatcher's Office magazine, published by the Operations SIG. Editor Bill Kaufman and Art Director Otto M. Vondrak did their usual fine job on my material.

The article covers the basics of Track Warrant Control (TWC), a couple of examples of the Track Warrant Form modified for model use, and some other forms that have proved useful in developing operating sessions. While TWC wasn't widely deployed on real railroads until the 1980s, I've had good luck utilizing it on model railroads set in earlier eras.

TWC is fast and easy to set up, easy for crews to learn, and doesn't impose special requirements on layout design, construction, or complexity (as opposed to TT&TO, which demands sufficient running length; or CTC, which requires a signaling system and associated electronics.) TWC is a great first step to get ops started on any layout, even if other traffic control schemes are contemplated for later. I'm all about reducing the MTTF (Mean Time to Fun) in getting ops started, and TWC is a great tool in that regard.

By the way, for anyone interested in model railroad operations, OpSIG membership has to be one of the best deals on the planet: memberships with on-line delivery of the magazine are as low as 5 bucks per year!

It was fun for me to see these ideas and examples in print – it makes the work to prepare an article worthwhile.
Posted by Byron Henderson