I'm pleased to have two articles published this month in the commercial press. By coincidence, each of the articles deals with a smaller shortline or terminal prototype, each of which was once under wire! Each of the layouts was also designed primarily for switching operation by a small crew. 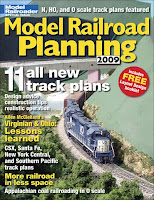 The Visalia Electric (VE) is the subject in Kalmbach's Model Railroad Planning 2009. The VE was a Southern Pacific subsidiary that once operated interurbans under wire, but later was a freight hauler primarily serving the citrus growing areas near Exeter, CA. The layout design is for a fairly large basement, but with the odd protuberances and access needs typical of these spaces. As John Armstrong often recommended, a long room-filling spiral proved the best way to capture some signature prototype design elements and use the space efficiently.

Joe Fugate's new Model Railroad Hobbyist mediazine issue #1 features a design for the Hoboken Shore Railroad (HBS), an interesting little terminal shortline serving shoreline industries in its namesake New Jersey city by the Hudson. This little railroad had both car float and on-rails interchange, unique industries and operation, even a setting with some topography. The layout design is the third HBS track plan for this client, who had to deal with some (happy) changes in life circumstances and domiciles along the way. The layout was a bit compressed to fit the spare-bedroom-sized space, but managed to capture some of the signature scenes and a flavor of the prototype's operations.

You can also read more about this HO switching layout track plan on my web site.

Writing for the commercial press is always a lot of work, but I seem to enjoy the finished product enough to do it again (and again). I hope you'll enjoy these, too.
Posted by Byron Henderson