A Layout Grows in Brooklyn

Or, more accurately, from Brooklyn. And not Brooklyn, NY, but the Brooklyn Basin* area of Oakland, California. I wrote a while back that my layout building efforts in the garage had been waylaid by impending home remodeling. So I decided to focus for now on a shelf layout in our spare bedroom home office.

My proto-freelanced Oakland Harbor Belt's Brooklyn Basin District represents a mix of real-life and imagined industries. In real life, the actual industries were served by the Southern Pacific (now Union Pacific). In my version of reality, the OHB also curves along Oakland's Inner Harbor, serving some industries jointly with the SP and some on its own. 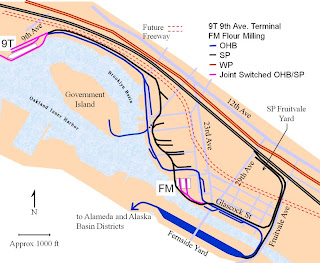 The N scale shelf layout will be built on wall standards, providing space for desks and office equipment below. There may be a few small changes to the track plan before construction, but I think this will be pretty close to the final configuration.

You can read more here about my imagined enhancements to real life and my N scale layout plans for Brooklyn Basin. Hopefully the New Year will bring some actual layout construction updates.

*I'm not sure how the area came to be called Brooklyn Basin, but the name dates back at least to the late 19th century. The area at one time was apparently more of an actual drainage basin, but there has been substantial building on fill since then.
Posted by Byron Henderson