By 1990, I was thinking off-and-on about building what would have been yet another generic model railroad – but there was no real "spark" to my ideas. My coworkers and I frequented an Italian restaurant located in a shopping center alongside a hobby shop. After lunch, I would often wander into the shop and take a look at the magazine rack. What I saw while leafing through the December 1990 issue of Model Railroader literally froze me in my tracks. I actually momentarily felt as if I was in one of those scenes in a movie where a crucial newspaper headline whirls suddenly into view. 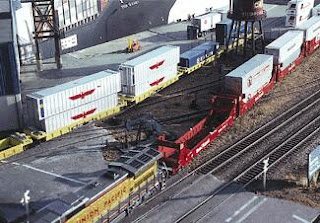 
Bob Smaus' photos of his 30"X72" HO module hit me hard. Here was a slightly gritty, workaday setting, down by the docks. Tracks purposefully crossed one another in a bustling industry scene. And all in a few square feet. 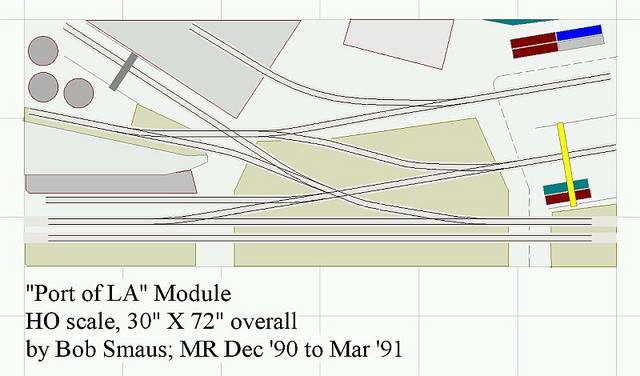 This was the firm, swift kick I needed to jump back into thinking seriously about the hobby. Real industries with real work to do — not generic-looking quaint little fantasy factories covered in novelty siding. And it seemed, well, buildable.

As I followed the project series over the next three issues I began to think more about why real railroads exist – to move goods from industry to industry, not just run around in circles. It helped that the Port of LA project was set in my home region of Southern California. So much of the rest of what I had been seeing in the model press at the time was Appalachian coal hauling and creaky Colorado narrow gauge. Smaus' little layout felt more like something to which I could personally relate. And although I didn't realize it at the time, the nascent seeds of a port railroad that had been planted years before were beginning to sprout. (More on that later in this series.)

Bob Smaus is a supremely talented modeler, skilled photographer, and a great writer (his day job was as an editor at L.A.'s major daily newspaper). He used all those skills to bring the Port of LA module to life in a way that affected me deeply. It's not an overstatement to say that I am in the hobby today because of seeing this series.

The Port of LA was also featured in the Kalmbach book 6 HO Railroads You Can Build. The module itself eventually found its way to A-Line/Proto Power West, where it has been used in promoting their products. And of course, Bob went on to build his fabulous SP Southern California themed layout (MR, July 2006, et al). [His very first layout effort hadn't been too shabby either: MR, Oct 1989.]

Of course, packing all of this action into 15 square feet of module that can also function on its own makes for a lot of compromises. In looking at the track plan now with more experience, I recognize the significant limitations of the multi-switchback scheme, where some industry tracks must be emptied before others can be switched. In fact, some industries would probably be disrupted just to use the convoluted runaround path. A container yard track only about 16" long in HO is pretty limiting, and it would certainly be more realistic to extend the layout into more space, creating "breathing room" between the different industries and easing some of these issues (as Mark Lawler did in building a representation of Smaus' Port of LA into his N scale layout).


But those practical layout design considerations and concerns were for another day, far down the road. As an inspiration, a motivator, even a slightly adrenaline-fueled model railroading jump start, Bob Smaus' Port of LA module takes a leading position in my list of Inspirational Layouts. And that crystal-clear San Fernando Valley Fall day in November 1990 when I first saw the layout article still ranks as one of my favorite model railroad memories.
Posted by Byron Henderson