Ah, young love. So intense, at times so misguided. I was reminded of one of my first model railroad "crushes" the other day. Going through some old papers, I found a printout of my first serious layout design. It was done with crude turnout templates in Powerpoint(!) and probably dates from about 1989-90. I describe the plan as "serious" and not "good" because there are definitely some issues. But I remember being intensely focused on the concept for a few weeks. As with any old flame, some memories are more than a little embarrassing, but there are some warm thoughts, too.

I sketched out the plan in 3rdPlanIt and (remarkably) everything fits – but I resisted the urge to correct or improve anything. Twenty years later, some of the details are a little hazy anyway. The overall track locations were suggested by a layout I had seen in an NTRAK publication, which had a sort of a hilly pretzel overcrossing configuration separated by a backdrop from a narrow yard area along one long edge. Benchwork was to be a hollow core door. I had only just started thinking about the hobby again after a long time away and was considering N scale for the first time. 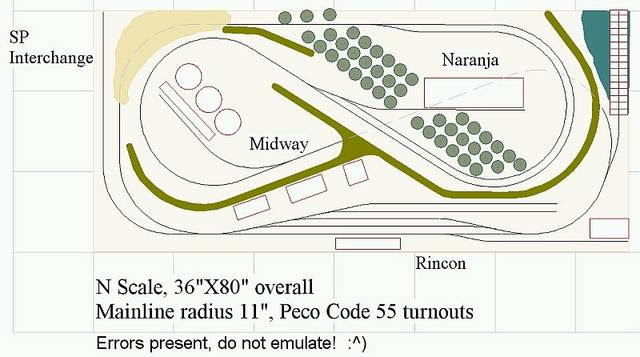 Click here for a better view of the layout
I had recently lived in Carpinteria, CA and the design vaguely suggests that area. The pier or wharf near Rincon was inspired by a short, high pier the Chevron company owned near Carpinteria to load men and equipment onto boats for transfers to the offshore oil platforms nearby. In my reimagining, this pier would somehow serve railcars. An interchange connection was imagined to the SP (which actually runs through the area) and the main on-line industries were citrus packing and some sort of oil-related industry. Both were important industries in the region. I tried to divide the small footprint into a few different scenes, although the backdrops might have proved a little tricky in actual construction.

I see a number of obvious things I would do differently today. The stub-ended yard tracks should point in the opposite direction, at least given where the interchange connects and where "Midway" is located. I think I may have imagined this as a shortline that would work the interchange, build a train, run out to Midway and Naranja, then runaround and return (or was it the other way around?). Too many tracks are parallel to the edges of the benchwork, and the model railroad cliché of "an industry track in every corner" is well-represented.

Hidden or secluded sections completed a continuous run and the roughly 2% grade should have been workable. I don't remember what I was thinking of calling it, but the "Rincon Northern" might have been appropriate (the California coast runs roughly East-West in the area). I also don't recall if I simply wasn't thinking of staging at that point or had purposely left it out in favor of the shortline-with-interchange idea.

This little plan was never built. I became involved with a friend's layout based on the Santa Maria Valley Railroad (see Model Railroad Planning 2004 or view the layout plan online here) and my own interests turned to more prototype-inspired designs. Looking back, I think it would have been a great boost for my own modeling if I had taken the time to build and operate this simple little project, even with the flaws. In any case, it was fun to revisit a past infatuation. [And a great way to procrastinate on the clean-up I was supposed to be doing the day I rediscovered this track plan.]

Speaking of firsts, I was enjoying Gillian Welch's album Time (the Revelator) last week. Her haunting bluegrass/folk/alt-county style with musical partner David Rawlings is well displayed in this album, which includes the slightly melancholy reminiscence "My First Lover". Welch might be best known for her work on the soundtrack to the movie Brother, Where Art Thou, but her music is a very intriguing mix and not limited to old-timey tunes. Rawlings adds sparse but moving fills and creative leads on acoustic guitar that build the atmosphere of each tune. Great record!