When I heard that family anecdote, it rang true for me when it comes to model railroad operating sessions. I've written about the 1:1 alternative to fast clocks and how much more comfortable it is for me than watching the hands of a fast clock whirl around at a dizzying pace.

No doubt part of the reason is my preference for yard jobs and local switching roles. These model railroad job duties don't scale down with the fast clock -- they take about as long on the model as on the prototype. And I like to think about the steps, working to replicate some of the procedures of a real-life crew. One of the most enjoyable operating sessions I ever had was on Rick Fortin's ATSF 4th District layout. I teamed with friend Alan Cooper on the Kingsley Turn, a job that works an isolated branch well off the busy mainline.

Once safely situated on the branch, Alan and I used small post-it tabs to simulate the brakemen on the ground as we switched the town of Kingsley and the adjacent Cal Port cement plant. As real crews do, we tried to plan our moves to minimize walking for the crews on the ground as opposed to just blasting all over the tracks spotting and picking-up cars. Sometimes the seemingly obvious move is not the way a real crew would do it when you consider how long it would take for a real crew member to walk from one place to another to "pull the pin" on a cut of cars.

Alan I and I worked away for a couple of real-time hours serving the various industries on the Kingsley Branch. Rick's layout uses 1:1 time, so we didn't feel overly rushed by the pressure of an artificial time clock. Instead, we enjoyed the satisfaction of working more like a real-life crew, attending to safety and the needs of the "men on the ground".

So yeah, I like a more reasonable pace and the chance to replicate prototype concerns. But given my Grandma Nellie's one clock in the house that stayed on "real" time, maybe some of it’s genetic! 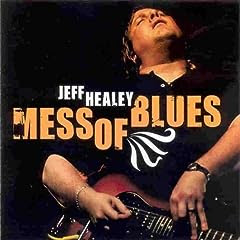 I was saddened to read news on the web of Jeff Healey's passing earlier this month. He was an amazing guitarist and signer. Blinded at a very early age by a rare cancer, he learned to play guitar in a most unusual style, holding it across his lap and fingering it from "above" the neck (opposite the typical method). Most famous for his first major label album See the Light and his appearance in the movie Roadhouse, Healey was a powerful presence in concert. Like many musicians, he later explored a different genre than the one that made him (modestly) famous, playing trumpet and guitar in jazz bands. A new album of blues covers, Mess of Blues, was recorded before his death and is a strong reminder of his dynamic style. By all accounts he maintained a full life despite suffering the continuing effects of the cancer, an inspiration to those of us who accomplish less with far fewer obstacles.
Posted by Byron Henderson