What's in a Name?

With apologies to the Bard of Avon (whoever he or she may have been), one of the recurring questions on forums and in casual model railroad conversations is what to call a freelanced model railroad. Although I personally find them trite and unconvincing, there still seems to be quite a following for the cutesy-poo names such as "Bumpkin and Booville Lines". Another group goes for dynamic sounding names like "Sidewinder Railway". And yet another subset chooses a name to yield a clever (or naughty) acronym (toilet humor seems, unfortunately, to be particularly favored here).

But most real railroads' existence depended on investors and customers viewing them as reliable transportation organizations. Although real railroad names were sometimes ambitious, even aspirational, they tended to communicate a business-like sense of purpose. Even if they never reached the end points their names suggested (e.g., "Kansas City, Mexico, and Orient"), these names provided a promise to which investors and the general public could relate.

I talked about synchronicity in my last post about model railroad layout analysis in terms of the track design and operations. And naming can certainly play a role as well for freelanced designs. A realistic name communicates purpose and can help anchor the layout in a place and time. But what makes a name realistic?

Bob Warren undertook a survey of 100 real-life railroad names from the classic era in the Layout Design News LDN-13, April 1995, published by the Layout Design SIG. Bob found that the majority (nearly 70%) had a geographical term in the name (Pacific, Atlantic, Central, Western, Eastern, etc.). 56% had a city name in the title, 29% a state name (of course, there were many combinations like New York Central).

More modern times have seen names that lean toward the anonymous acronym ("CSX", anyone?), yet even these tend to have geographical meanings and roots, even if only from the names of the merged fallen flags.

So when comparing freelanced names, "Utah Colorado Western" (Lee Nicholas' fine layout) just seems more compelling to me than "Higgleytown and Busterville". One feels like a real business to me, the other like something from a storybook. On the other hand, a freelanced layout depicting a struggling backwoods logger might well have a more modest name, suggesting its lesser aspirations. Maybe not something silly, but more "Sierra Lumber", as opposed to "California, Oregon, and Idaho".

When chosen carefully (mindful of the generalities of real-life names), a freelanced railroad name can communicate much about the imagineered prototype and its locale, era, and purpose. To me, that gives a freelanced line a head start in the viewer's mind and allows the track plan, scenery, and modeled industries to be viewed in context. Choosing the name of a freelanced railroad is fun, but it's also an easy place to go wrong. 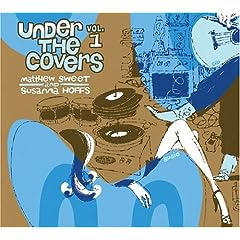 Most of time I mention music in the blog, it's commenting about an entire album that I really enjoy, not just a song or two. Under the Covers, Volume 1, by Matthew Sweet and Susanna Hoffs (everyone's favorite Bangle) is not a breakthrough concept -- it's a collection of mostly-familiar late '60s covers. I actually bought the CD for my wife and didn't expect to be too excited about it. But the interpretation and execution of a few of the songs is just terrific. Their cover of Lionel-fan Neil Young's "Cinnamon Girl" is one of the coolest pieces of power-pop you'll ever hear. (Sweet's standout guitar work on this number is hardly an imitation of Young, much more of a retro revival.) A number of the other songs on the album just aren't my cup of tea, but the presence of a few standouts was a really pleasant surprise.
Posted by Byron Henderson