Sometimes a particular model will give me a little boost and motivate me to work on the layout. One of these is a cool little SW-1 model built for me by "Crittermeister" Randy Gustafson, whose neat compact Hickory Valley RR was featured in the July 1995 Model Railroader. Randy has built all manner of small locos in N scale, fearlessly scrathbuilding and kitbashing shells and mechanisms.

This SW-1 is made from a shell casting pulled from Randy's custom mold and a modified Kato NW-2 drive. Custom brass handrails complete the switcher, which wears a "darned close" livery made up of decals pieced together from a couple of commercial sets. (All photos by Randy).

This little gem will be borrowed/leased power for the Howard Terminal segment of the layout, a separate section built as a flip-up portable island. The Howard Terminal will provide DC on the rails, so there's no decoder in the SW-1 -- we used the space for more weight. Looks great, runs great, makes me want to get more done on the layout. So why am I blogging … hmmm. 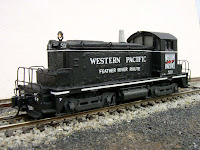 Randy posts quite often in the Atlas N scale forum, so I decided to drop in and comment on the thread where he described the process of creating the SW-1. Since I was in a forum anyway, I decided to look around the web and see if things have changed on the forum scene during my self-imposed exile.

Yeesh … that was a mistake. Not much has changed, least of all my tolerance for jerks and blowhards. Guess I'm not quite ready to venture back onto the forums.

Forum foolishness aside, the Internet is an amazing medium for connecting us to small companies and individuals (like Randy) that can provide modeling possibilities beyond our own personal skills. Even though it's only running on my interim switching layout now, Randy's SW-1 is a unique model that's giving me a good shot of inspiration.
Posted by Byron Henderson