I always enjoy working with Editor Tony Koester and Kalmbach in publishing one of my custom layout design projects in Model Railroad Planning. This time around, it was actually two layouts – both based on the same area of Clackamas, OR in the 1990s.

The first client was looking for a basic HO layout for this specific industrial area served by the Southern Pacific to fit some on-hand pre-fab sectional benchwork. The layout was set to occupy a fairly restricted space, so while we were able to add one more section, things were tight.

The second client inquired a few weeks after that project was finished. He wanted an N Scale switching layout located somewhere in the west to operate a wide selection of ‘90s SP-and-kin diesels. Bloody Nose, Speed Lettering, Kodachrome, etc. I described the previous HO project, just as an example of the kind of thing we might do. No need to look further, he decided, and so Clackamas was redone in N scale. 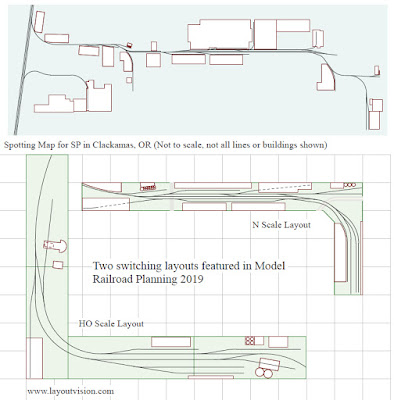 Better artwork and more details are found in the MRP article, which is part of another great overall issue. Download a .pdf of this image here.

Coincidentally, a friend who lives near the modeled area had decided before the magazine was published to build a layout of the same industrial area – but in two-rail O Scale! He’s already on his way to a track plan, but I might be able to make a suggestion or two. It’s a three-fer!