It was a pleasure to join the guys on the Model Railcast Show for another podcast (Show #76). While the primary topic was my recent article in the OpSIG's Dispatcher's Office magazine on Track Warrants and other operating forms, we also talked a bit about my bias toward layout designs that tell a story and a few other odds and ends.

Examples of Track Warrants and related forms from the Dispatcher's Office article are on my website.
Posted by Byron Henderson 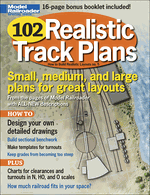 Kalmbach's recent publication of 102 Realistic Track Plans has much to recommend it. The track plans are generally much more practical than the chestnuts found in the 1950s‑era 101 Track Plans for Model Railroaders, since many of them reflect layouts that have actually been built. Beyond the track plans, the additional planning tips that have been included are useful and reasonably up-to-date (although there's no mention of model railroad CAD).

Because of this, 102 Realistic Track Plans will likely be much more helpful to most aspiring layout builders than 101 Track Plans. Many of the plans include more-current ideas such as prototype inspiration, staging, interchange, and larger industries (my Four Cornerstones) – so they are more likely to get a newbie started out on the right foot.

The track plans are selected from designs published in Model Railroader, Model Railroad Planning, and Great Model Railroads in roughly the last ten years. It may be that this coincides with the change to digital creation of track plan art at Kalmbach. Each plan is accompanied by a brief information box with the original publication citation and some new comments by an MR Editor.

One of my designs is included, the N scale 4X8 Houston Port Terminal Railway track plan from MRP 2002. This design has been republished in multiple places by Kalmbach, I guess because of the 4X8 "sacred sheet" format. From an author's standpoint, I think the ideas in the Alameda Belt Line (MRP 2005) or Santa Maria Valley (MRP 2004) layouts are more engaging, but that's just my opinion.

Interestingly, 102 Realistic Track Plans is published as part of the "How to Build Realistic Layouts" series, rather than as a stand-alone book like 101 Track Plans. Perhaps the thought is to publish these more often, which would be welcome.

For future versions, there are a number of changes I would strongly suggest. The first is better attention to detail: there are some unfortunate cut-and-paste typos that are very confusing if one has not seen the original MR article.

Much more importantly, I wish that Kalmbach had been wiling to use the new text as a way to highlight both the strengths and weaknesses of some of these plans. A number of the plans have flaws that would likely cause significant problems, such as too-sharp s‑curves on grades, an over-reliance on switchback industry spurs, and impossibly tight clearances for subterranean hidden tracks.

I understand that this is a tricky line to walk: too much criticism of a published design casts a bad light on the original planner (and on MR for including it). But the opportunity to provide more insight into the design process, trade-offs, and compromises is tremendous.

This new publication would also have been a chance to make use of some of the all‑new sections to highlight ideas that newbies find difficult to grasp but are nonetheless very important, such as staging -- but I recognize that there's only so much space that can be given over to expository text in a "track plan" book.

But those criticisms aside, 102 Realistic Track Plans lives up to its title in most respects. And it's a huge improvement over 101 Track Plans, in my opinion. I look forward to more of these. And I sincerely hope that Kalmbach will take advantage of future such publications to provide some background and instruction to readers through deeper discussions of re-published plans.

And while we're at it, might it not be time to re‑title the next printing of 101 Track Plans to alert readers to the realities (good and bad) of its content?
Posted by Byron Henderson