I've written quite a bit in my life: marketing and business plans, technical documentation, ad copy, articles on technology, ghost-written book chapters, even the odd model railroading article. But it was a neat surprise to open my copy of Model Railroader's How to Build Realistic Layouts: Freight Yards special issue this week. Obviously, I knew what my article "A Baker's Dozen Yard Ideas" would include -- I wrote the text and prepared some of the rough illustrations. But Andy Sperandeo and the folks at Kalmbach matched up portions of the text with file photography and new illustrations that added a lot to the piece. It's rare that I write something and feel that the final result is significantly better or more engaging than what I submitted, but in this case, it surely was.

The rest of the magazine is pretty interesting, too. I don't know if these special more-than-a-magazine-not-quite-a-book issues sell well from a marketing standpoint. But it was a real pleasure to see my work showcased in this one.

(Parenthetically, I have also been a bit surprised that a few folks don't seem to know that a "baker's dozen" is thirteen. When I was a kid, it was common for one additional donut or other baked treat to be included when a dozen of the same item was purchased (this carries on for donuts at our local purveyor). In this era of pre-packaged foods (and healthier eating!), perhaps it's not surprising that the phrase is less well-known. Interestingly, the baker's dozen seems to have originated in England out of a fear of penalties for selling a customer short.)
Posted by Byron Henderson

Three sides to every story

I had a fun meeting with (hopefully) a future layout design client this week. He's getting close to finalizing a new layout space, excellent modeler, knows his prototype really well, has a clear vision of what he wants to accomplish. And that prototype is new to me, fairly unique with a lot of character. All in all, a project I am genuinely looking forward to.

Generally, I think he and I share the same overall concept and vision of the layout. But even so, we have significant differences of opinion on the inclusion of some scenes over others. (Needless to say, the client always has the final choice, although I try to make my case well in the discussion.)

It is always fascinating for me to see how two relatively knowledgeable people can take the same prototype, givens and 'druthers, etc. and distill different visions of a layout. Our vision for a layout design is influenced both by the way we see and by the way we visualize -- two words that seem the same but are mirror images of one another.

His vision comes out of many years spent studying and admiring the prototype and designing his own earlier successful layout. There are towns and scenes he wants because he wants them. More justification isn't possible -- or necessary. Those towns are the sine qua non* of the prototype and region to him. At the same time, from my outsider's perspective, there are different towns and scenes that hold a particular appeal because they communicate something especially unique about the prototype. Well, and OK, a couple of them just fit better in the space.

There are three sides to this story: the historical reality of the prototype -- where it went and what it did; my client's heartfelt vision and visceral understanding of the line; and my own inclination toward choosing scenes that tell a unique story of the prototype and era (and oh by the way, will fit!).

The creative tension between these "three sides" of the story will ultimately result in a better layout. And selfishly, the challenge and reward in coordinating these many different elements is what makes layout design so much fun for me.

* from the Latin: "Without which, not; an indispensable condition" 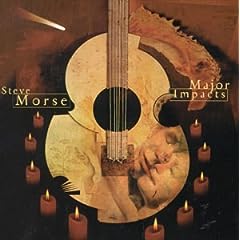 My musical listening has finally moved back into this century with Steve Morse's Major Impacts. Morse is an incredibly gifted guitarist, beginning with the Dixie Dregs, then his own solo career, with some time out as "hired gun" guitar slinger with later-day incarnations of Kansas and Deep Purple. (Those two gigs alone tell you something about his range.) Major Impacts is unique -- Morse plays his own original tunes written and performed in the style of his major influences. Thus, there's a song in the style of the Rolling Stones, the Byrds, etc. (not covers, but original compositions). In a couple of interesting cases, Morse links some performers together in a single tribute, such as Jeff Beck/Alex Lifeson (Rush)/Eric Johnson. Listening to these multi-artist-inspired tunes is very interesting because one hears not only their influences on Morse, but on one another. And the Leslie West (Mountain) inspired tune sounds like Morse is channeling West's heavy licks note for note and tone for tone. Amazing instrumental virtuosity!
Posted by Byron Henderson

When I moved to the Bay Area, I had the pure dumb luck to pick a house a few miles away from custom layout builder Rick Fortin. Those of you who have seen some of my articles in the hobby press know that I have helped out a bit with construction and op sessions at Rick's layout over the last eight or nine years.

The quality with which Rick builds is an inspiration, and I've learned a lot just by being around the layout. But I still learn new lessons. A few days ago I dropped by while Rick and mutual friend Ted Thorson were reworking scenery as part of a project to put a connecting shortline into its first phase of operation. Rick has been extensively reworking sections of the layout roughed-in just a few years ago to create more realistic scenery profiles and add operating elements.

For many people, the thought of cutting into (even roughed-in) scenery is daunting. But Rick is always willing to make changes. This acceptance of the work required to make changes opens up many new choices, even for sections of the layout already in operation. One lesson learned for me is recognizing that every decision isn't "once and for all". If you're willing to make changes, it provides more choices in the future.

And that, in turn, helps diminish the "paralysis by over-analysis" so many of us experience.

Perhaps not the kind of guy you'd want your daughter to marry, but the late Warren Zevon had a keen eye, rapier-like wit, and certainly knew his way around a hook. While some of the lyrics are a little disquieting, A Quiet Normal Life: The Best of Warren Zevon is a lively look inside his mind and a time travel trip to the '80s. Nifty slide guitar and lap steel parts by Waddy Wachtel and David Lindley and that bright country-tinged production heard often in the era made this a fun listen this afternoon.
Posted by Byron Henderson